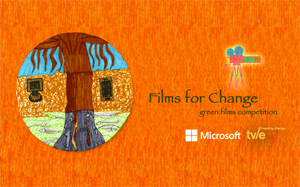 For South Asia climate change is an enormous challenge with massive humanitarian implications. Yet, says Anshul Ojha, tve’s Programmes Manager for South Asia, there is ‘a huge information and knowledge deficit about the environment and climate change. Despite a vibrant media and myriad technological platforms, the space available for critical issues including health, livelihoods and environment is alarmingly limited, both in television and mobile media.’ Even in user-generated content spaces, the human costs of climate change are rarely explored.

tve has worked for three years to enlarge this vital space with our exciting project, Films for Change. Established in 2012 in partnership with Nokia India (now Microsoft Mobile OY), Films for Change engaged young people in the environment through community screenings and social media. The pilot was so successful that we soon included filmmaking, and expanded our audience numbers, activities, partners and geographic reach. In two years, we reached more than 10,000 young people through nearly 200 workshops, discussions and screenings in more than 25 cities, from towns in the remote northeast to metropolitan Bangalore.

The Chai Song (the Tea song)
Films for Change combines the use of tve’s documentaries from its archive, with organised group discussions about the issues raised, entwined with film workshops enabling participants through film to deepen their understanding.

The Chai Song (the Tea Song) is a film made during a Films for Change workshop at Imphal University, Manipur, India. The song itself, about love and hope for the land in the north-eastern state of Manipur was written by participants during the workshop, who also filmed and then edited the video. Manipur is an area which has suffered turmoil for several decades.

‘We believe that films are a catalyst in society,’ Pranshu Singhal of Microsoft told us. ‘They help to create a new social context that encourages people to discuss, define and practice sustainable living. That’s why Microsoft has partnered with tve to create Films for Change. Films for Change has enabled young people across India to start their own movements for sustainability.’

‘Films for Change reaffirmed the power of film for young people far from the political and economic mainstream. Even those completely new to filmmaking came up with inspired ideas, creating films which told stories close to their hearts and their socio-political reality.’ Anshul Ojha – Programmes Manager, tve South Asia

View the informal discussion below around Film for Change, shot on a digital handicap in a Guwahati (Assam) restaurent ; Credit: Frederick Noronha